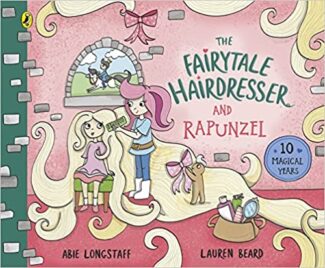 Join Kittie Lacey, as she faces her most hair-raising challenge - an evil witch, a tall tower, and a girl called Rapunzel who is having a very bad hair day. Will Kittie manage to tame unruly tresses that go on for miles, rescue a princess and create a happily ever after?

My daughter loves this series. In this first book Kittie Lacey is called to a tall tower where the witch is complaining she can’t get on with her evil plans as there is hair taking over the tower, Rapunzel is having a bad hair day. Kittie to the rescue!

This features a cast of many favourite fairytale characters who make an appearance to get their locks looked after by the best hairdresser is all the land! 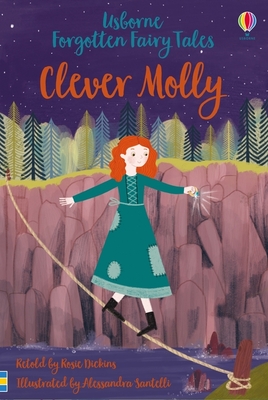 Molly and her sisters meet a wicked giant who wants to eat them. Molly's quick thinking saves them... but to defeat the giant forever, Molly will have to return and steal three magical treasures. Based on an old Scottish tale, sometimes known as Molly Whuppie.

Lily loves this book so much, this is the character she wanted to be for World Book Day.

It’s broken down into 5 chapters, perfect for children who’ve just started reading by themselves.

Molly and her 2 sisters are hungry. They decide to go out in search of food and come across a giants house where they ask his kind wife for food. When the giant comes home he invites them to stay the night, planning to eat them for breakfast. The girls escape and head on where they find a king who’s offered a reward of half his kingdom for anyone who can defeat the giant by stealing his 3 treasures.

This story of a bold clever girl saving herself and her sisters is a traditional Scottish tale. A similar tale is told in Ireland. Molly’s full name is given as Molly Whuppie. In Scotland, “whuppie” or “whippy” can mean nimble or clever

People have been telling each other fairy tales for thousands of years. Then, a few hundred years ago, collectors began whiting the stories down. The ones that became famous were the ones that reflected the ideas of the time.

These stories had patient, polite princesses such as Snow White and Sleeping Beauty. The takes with bold girls fighting their own battles were ignored.