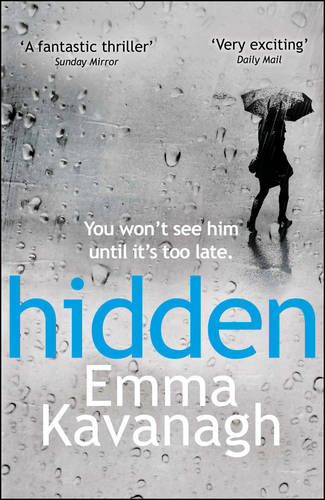 HE'S WATCHING
A gunman is stalking the wards of a local hospital. He's unidentified and dangerous, and has to be located. Urgently.

Police Firearms Officer Aden McCarthy is tasked with tracking him down. Still troubled by the shooting of a schoolboy, Aden is determined to make amends by finding the gunman - before it's too late.

SHE'S WAITING
To psychologist Imogen, hospital should be a place of healing and safety - both for her, and her young niece who's been recently admitted. She's heard about the gunman, but he has little to do with her. Or has he?

As time ticks down, no one knows who the gunman's next target will be. But he's there. Hiding in plain sight. Far closer than anyone thinks...

Emma Kavanagh, has written a very clever novel which sucks you in from the very first page. Not least because she starts the novel, just after the shooting has happened. The first chapter is told from the POV of Charlie, who is assessing the carnage around her, who she can see, who’s alive, who’s dead, who’s unlikely to make it. At this point the names mean nothing to you but then the story goes backwards 6 days and we start the process of getting to know the characters while slowly moving towards the present day.

Each chapter is told from a different point of view; Charlie the reporter, Imogen the Psychologist, Aden the police officer and The Shooter. Between them they shed light on the events that have led up to the shooting, not just the immediate 6 days prior to it, but the relationships and incidents from the past which have led everyone to this point and led to the lives of the main characters being interwoven.

At first I got a bit confused by all of the different people, not just the narrators but also their families and work colleagues who also have major roles in the storyline. However, it didn’t take me long to get comfortable with all the names, personalities and the relationships/history they had with the other characters.

About half way through I had to go back and reread the first chapter, the one describing who’s been shot and the state they’re in, by this time I had formed an attachment with certain characters and I wanted to make sure I hadn’t misremembered anything. I think it was a very brave move that Emma Kavanagh made in setting up the novel in the say she did.

There’s a lot of clues thrown in as to who the shooter is, there’s also a lot of clues to throw you off the scent. Although I figured out who it was I think it’s from reading so many crime novels and having an idea of how a crime writers mind seems to work, although she did have me alternating between a number of other characters for a time!