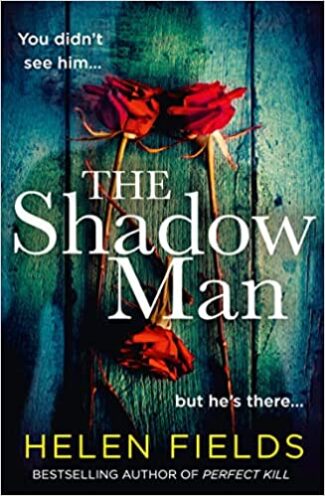 He collects his victims. But he doesn’t keep them safe.

Elspeth, Meggy and Xavier are locked in a flat. They don’t know where they are, and they don’t know why they’re there. They only know that the shadow man has taken them, and he won’t let them go.

Desperate to escape, the three of them must find a way out of their living hell, even if it means uncovering a very dark truth.

Because the shadow man isn’t a nightmare. He’s all too real.

This is possibly one of the darkest thrillers that I’ve read for some time. Helen Fields wastes no time with setting the scene and getting to know characters, instead she is straight into the action establishing the tone for the entire novel from the start.

Being inside the twisted head of The Shadow Man, knowing what is going through his mind when he is carrying out his actions gives you a great insight to how delusional this character is and means that you know there is nothing that he won’t do to get what he needs. Coupled with this we have chapters told from the POV of Elsbeth, Meggy and Xavier. You know that there are interactions that have happened between them and The Shadow Man that you haven’t seen, but seeing their reaction to him and their desperation leaves your imagination to what else has happened working overtime. There’s not actually a lot of scene’s where they’re all together, what scenes there are will chill you. But the scene’s where Elsbeth, Meggy and Xavier are on their own are haunting

Interspersed with these scenes are the chapters featuring forensic psychologist Connie Woodwine and Detecive Brodie Baarda who are leading the hunt for The Shadow Man. I enjoyed watching the relationship develop between these two total opposites, even though it was on occasion a little bit clunky. Connie’s tell it like it is attitude is fantastic, and Baarda’s Etonian English approach to people are completely at odds with each other but they work.

The synopsis of this novel calls it heart pounding. There’s plenty of novels out there that have descriptions similar to this, very few of them live up to it. The Shadow Man does. When I get nervous or worked up my foot starts to tap, it doesn’t happen often, I’m pretty level headed. On a couple of occasions reading this I found my foot slamming itself repeatedly into the floor, or me reading sentences peering through my fingers. You honestly have absolutely no idea where this book is going to go next, who is going to survive and what they’re going to have to go through in order to survive. There was more than one occasion where I felt my stomach churning as I was reading. This is more than a thriller