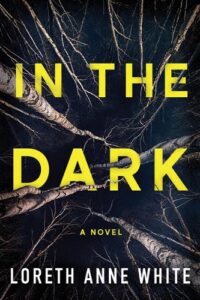 In The Dark by Loreth Anne White
on 01/12/2019
Genres: Thriller
Pages: 319
Format: eBook
Buy on Amazon, Buy on Bookshop
Goodreads

A secluded mountain lodge. The perfect getaway. So remote no one will ever find you.

The promise of a luxury vacation at a secluded wilderness spa has brought together eight lucky guests. But nothing is what they were led to believe. As a fierce storm barrels down and all contact with the outside is cut off, the guests fear that it’s not a getaway. It’s a trap.

Alerted to the vanished party of strangers, homicide cop Mason Deniaud and search and rescue expert Callie Sutton must brave the brutal elements of the mountains to find them. But even Mason and Callie have no idea how precious time is. Because the clock is ticking, and one by one, the guests of Forest Shadow Lodge are being hunted. For them, surviving becomes part of a diabolical game.

What lies do you tell?
Because we all lie.
Every one of us, and whoever claims they don’t is the biggest liar of all.

8 people stranded at a luxury resort, except the luxury resort doesn’t exist and they’ve all been brought there under false pretences.

The police, with the help of search and rescue, battling to find everyone as the weather worsens.

The story is told in two timeframes and from multiple points of view. There was so much potential for this to be a disaster and confusing. Instead it completely drew me in and shredded my nerves. Just when I felt I couldn’t take any more of the lodge storyline and sitting on the edge of my seat, the scene changed to the rescue mission and they built the tension from a different perspective, again I ended up on the edge of my seat.

Rather than just having the “who done it” aspect of this novel there was a whole “why did they do it” running through the first half of the storyline, with all of the potential victims hiding massive secrets from their past, all of which were interlinked. Once we get past the why then you’re left with the who, at various points you think that it’s obvious… and then you change your mind. By half way through I’d known for certain who the killer was 3 different times. Even approaching the end, I wasn’t entirely sure and that NEVER happens with a book.

In The Dark is available for free with Kindle Unlimited, you can sign up for a free trial here 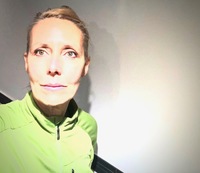 Loreth Anne White is an Amazon Charts and Washington Post bestselling author of thrillers, mysteries, and suspense. With well over 2 million books sold around the world, she is a three-time RITA finalist, an overall Daphne du Maurier Award winner, Arthur Ellis finalist, and winner of multiple industry awards.

A recovering journalist who has worked in both South Africa and Canada, she now calls Canada home. She resides in the Pacific Northwest, dividing time between Victoria on Vancouver Island, the ski resort of Whistler in the Coast Mountains, and a rustic lakeside cabin in the Cariboo. When she’s not writing or dreaming up plots, you will find her on the lakes, in the ocean, or on the trails with her dog where she tries—unsuccessfully—to avoid bears.