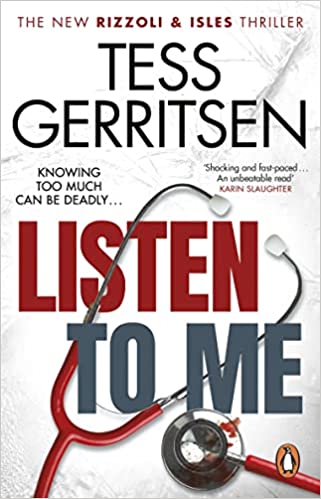 This time she should have trusted her mother's intuition...

The murder of Sofia Suarez is both gruesome and seemingly senseless. Why would anyone target a respected nurse who was well-liked by her friends and her neighbours? As Detective Jane Rizzoli and Forensic Pathologist Maura Isles investigate the baffling case, they discover that Sofia was guarding a dangerous secret -- a secret that may have led the killer straight to her door.

Meanwhile, Jane's watchful mother Angela Rizzoli is conducting an investigation of her own. She may be a grandmother, not a police detective, but she's savvy enough to know there's something very strange, perhaps even dangerous, about the new neighbours across the street. The problem is, no one believes her, not even her own daughter.

Immersed in the hunt for Sofia's killer, Jane and Maura are too busy to pay attention to Angela's fears. With no one listening to her, and danger mounting in her neighbourhood, Angela just may be forced to take action on her own...

I have a confession to make…

I’ve not read anything by Tess Gerritsen before and I got confused when I chose this as I thought I’d seen the tv series – but I hadn’t (I was thinking of Scott and Bailey 🤣). I was very confused – it happens far more than it should. Anyway, now we’ve established that I’m an idiot who doesn’t know one detective series from another let’s get to the review!

As you’ve probably seen from my previous reviews I’m a big fan of gritty police fiction. I love Karin Slaughter, Chris Carter and Karen Rose. Therefore this seemed like a logical series for me to try.

Obviously having not read the others I can’t compare this to them but to me it didn’t seem like it was Rizolli and Isles, there wasn’t an awful lot of medical examiner Maura Isles in this, the plot focused more on Rizolli and her mum, Angela. Angela was such a mum; comedy gold and interfering, blowing up Jane’s phone with her thoughts, you could imagine her as head of the Neighborhood Watch! I did really enjoy having her in the novel – even if it was at Maura’s expense.

You all should know by now that I love multi-POV and dual timelines, this has them both with chapters being told from the POV of Jane, Maura, Angela or Amy (a girl who was involved in a hit and run a few months previous). I loved getting to see how all of the various threads came together.

This book was enjoyable enough that I’ll be working through the backlist – and hoping for a bit more from Maura in them as I do like a medical examiner’s prespective.

I’ll hopefully get my buddy reader to start this series from the beginning with me (with my memory once we’ve made it to this one I’ll have zero recollections of what happened).